About two years ago I got it into my head to go on another Great Undertaking. Having done several of these in the past, it had been a while since I last set my feet onto a road or path with a plan to walk it to its end and see where it would take me. So I decided to visit that part of the world I’d been longing to visit for a while now; I was going to visit Scotland. And me being the person I am, I was going to do it right the first time and walk the entire length of the Scottish highlands.

Why though? Well, apart from it being a nice challenge and a great way to kickstart a travelblog I figured it was the only one true way to really get to grips with the country. Merely walking through a part of the hills and calling it a trip wouldn’t be enough. I needed to know what drives the people living there, what does it mean to be a Highlander? I wanted to really understand the land, to feel its ruggedness under my feet, to bask in all its wet and rainy glory, to endure the marshy hills for weeks on end and to ultimately come to the very essence of the highland spirit itself.

There was no way I would figure all this out by simply acting the tourist and go on my merry way, trail after trail. So I devised a plan of sorts, a quest if you will, to find the wisest man in Scotland and ask him a simple question: Please describe the highland spirit, in three aspects or less?

Since wise men tend to live on mountains it only made sense to start looking in the highlands. I needed to gather this wisdom from more than one source though, so I would be interviewing wise men and women and master craftsmen of all backgrounds. I would be doing all this on my way to Cape Wrath, Scotland’s northwesternmost tip. It was said that on that forlorn and remote cliff stood a single lighthouse, where one man spent his days in solitude. Surely this must be the wise man I was looking for. What was he doing there? Reflecting on his exsistence? Studying the secrets of the universe? Making toast? I aimed to find out.

The best place to start looking for the essence of highland culture would be one of the many Highland Games being held all over the country. I found myself attending the Games held in Oban. Here I met mr. Hamilton, a proud member of the Argyll Gathering society, teacher of the English language (“Not Scottish, for obvious reasons”),  and currently living in Rome. When asked about his foreign residency he merely looked at me and riposted with a simple “Have you seen the weather here?”.

When asked to describe three aspects that define highland culture he replied:
“A strong sense of self-reliance, small but tightly-knit communities and a strong cultural identity. The first two are sides of the same coin,” he explained. “The total population of the highlands is comparable to that of a large city. People live in small communities that are quite dependant on each other. There aren’t any large-scale facilities to accomodate your every whim and want, so one needs a degree of self reliance and good neighbours to get certain things done.”

A while later I met with Ian R. Spink, a man with a degree in Applied Enviromental Science and now a master of the Arbroath Smokie; haddock smoked in traditional fashion, over a beech and oak fire in wooden half whisky barrels covered with heavy cloth. If you’ve never tried this delicacy before, I urge you to do so!

When asked about his take on highland culture he replied with “Pride in local traditions and delicacies, pride in quality produce and attention to locally sourced food. Deep-fried Mars bars, for example,” On a more serious note he added: “Scotland’s weather and one-of-a-kind ecosystem make a perfect recipe for unique local products. There’s a notable difference in the taste and quality of local produce as opposed to imported goods.”

I continued my journey. It wasn’t long until I met another couple of wise Scots in that most Scottish of enviroments: a local pub.

This time I asked the question to trump all questions to David and Hillary Bridge, a retired couple “Doing as little as possible since 1979”. At first I misspoke and asked David to describe the highlands in three words. Being the practical man he was he replied: “Pretty wet sometimes”. Thanks David.

Hillary already had her three words ready by that time, so I never bothered to redefine the question. To her the three things that described the highlands best were “Mountains,” meaning the amazing scenery, “Soul,” referring to Scottish traditions and strong sense of identity and “Wind”, being the most prevalent aspect of living in Skipness.

By now I decided to not tarry any longer and push on towards Cape Wrath and seek out that mysterious wise man in his solitary tower of illumination.

After weeks of traversing some of the most marshy terrain imaginable I finally reached the lighthouse atop the high cliffs marking the end of my quest. I walked up to the lighthouse, which seemed to be fully automated and locked tight. The surrounding buildings as well. A big red door with a sign that read Ozone Café was shut tight. Had I come all this way for nothing? Or was this a clever test perhaps?

I decided to look around the area some more and eventually came back to the big red door. At that point he appeared next to me with a wheelbarrow filled with freshly dug peat, two dogs in tow. “Want to get in?” he asked me with a half grin that suggested he already knew the answer. “Is the café still open then?” I asked in return.
“We’re always open, lad”. The ‘We’ he referred to consisted of John Ure, being himself, and four dogs named Bracken, Merlin, Ptarmigan and Pippit. His wife Kay used to live out here as well, but has recently taken to living in Inverness with their daughter and granddaughter.

While I set down my backpack John kindly offered to make me some toast and beans, which I eagerly accepted. While sipping from a cold pint of beer I asked him what someone actually does for a living out here. He told me he mostly just acts as a general groundskeeper as well as being the proprietor of the Ozone Café we found ourselves in, catering to the few tourists and walkers coming here throughout the year.

I felt the moment was right. “Could you describe the highland spirit for me John? Using no more than three aspects please.” His reply consisted merely of a sly grin, after which he bade me a good night. Confused and tired, I went to sleep.

The next morning he saw me off, and slipped a tiny piece of paper in my hand, the same wily grin on his face he donned the night before. When I opened the note and read its contents, he disappeared as quickly as he had appeared the previous day. The note only read one word.

The Scottish Highland Midge – Demon and Saviour of the Wild Places 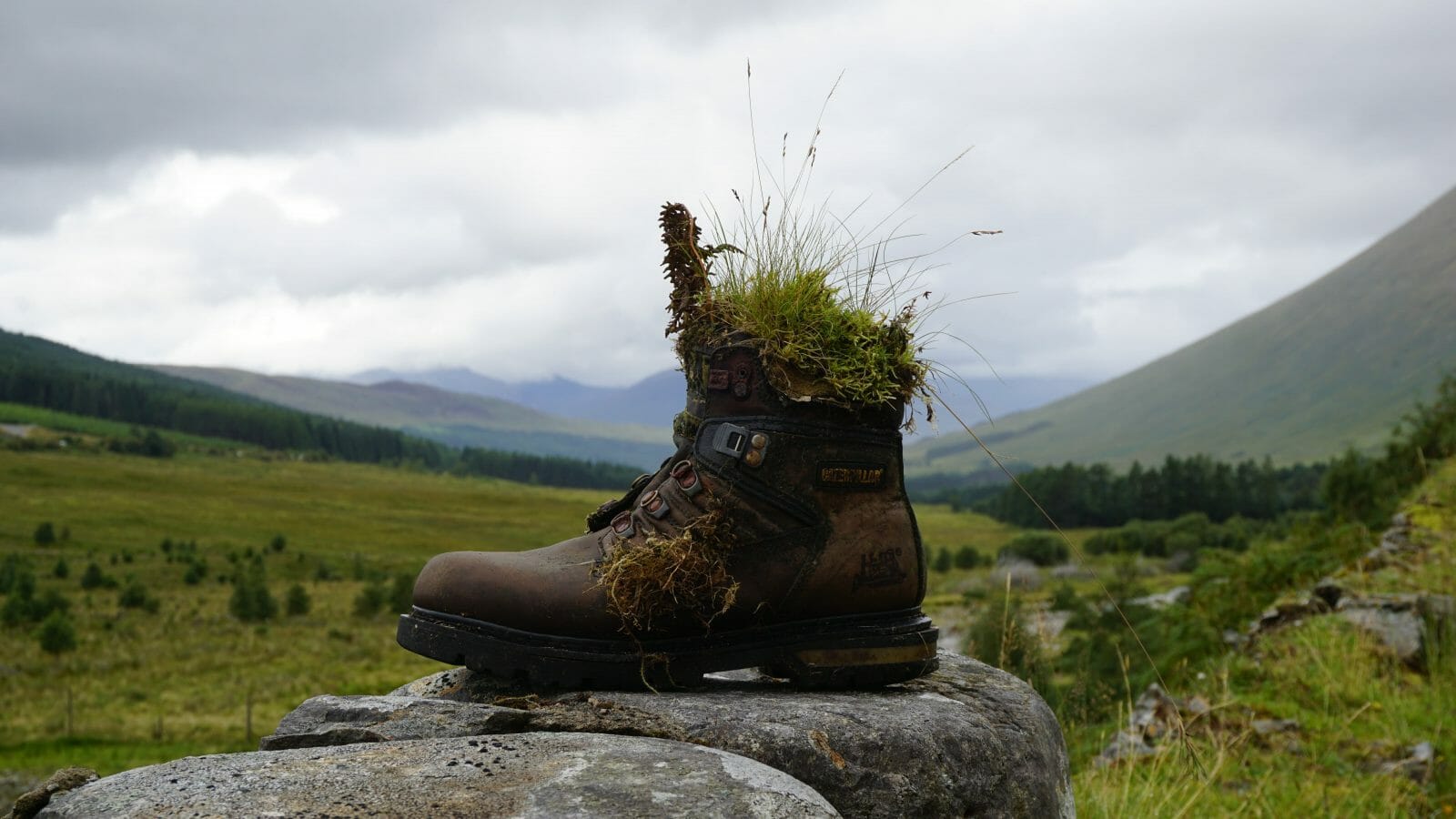