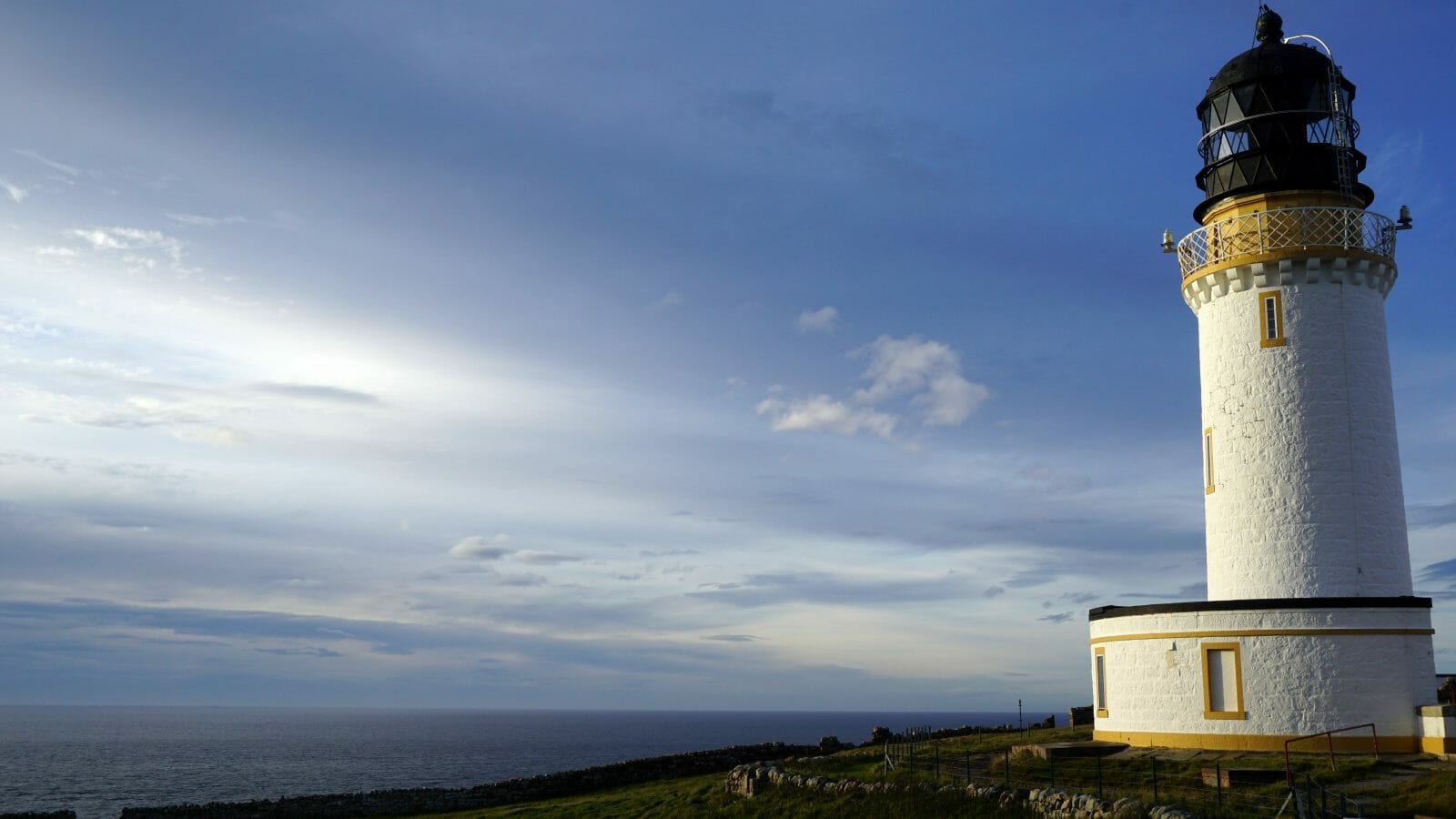 In this series, I look back on my three-week solo hike along the Cape Wrath Trail: Scotland’s most challenging long-distance trail. Along this journey through some of the most difficult terrain the Scottish highlands have to offer, I had to deal with marshy trails, missing supplies, friendly Scots and being completely shut off from the modern world. Read on to find out more! Want to read the rest? Click here for parts one, two, three and four.

If there is one thing a few weeks of solo hiking are good for, besides really toned leg muscles, it’s getting to grips with your inner thoughts. Nothing will let you reflect more on your own existence than hundreds of kilometres of trails, roads and peaty marsh. I was on my final week of hiking the Cape Wrath Trail and I was beginning to understand the real reason I started on this trip.

This next part of my journey to Cape Wrath would lead me along the eastern slopes of Ben More Assynt and Glen Coul beyond, a stretch of around thirty kilometres that I hoped to walk over the course of two days due to the difficult terrain ahead. This plan depended on me finding a spot to pitch my stake-reliant tent, however. As it turned out, there wasn’t one, which meant a long day of overcoming some of the wildest terrain I had encountered so far. Despite the hardship, this allowed me to descend Glen Coul late that evening during the last hour of daylight, my approach heralded by roaring stags as I followed the path down towards Glencoul bothy.

Have you ever seen a waterfall during twilight? It’s something to put on your bucket list, trust me.

Glencoul bothy is one of those places you’ll definitely remember along the Cape Wrath Trail; a spacious bothy built up along an abandoned house looking out over a gorgeous lochside view. The loch itself is actually a bay, its salt waters housing numerous seals, a banquet of mussels and offering a nice breeze to chase away those pesky midges during summer.

After spending a day gathering mussels during low tide and having myself a proper seafood feast, I packed up my belongings the next morning and picked up the trail where I left off. After a few hours of climbing over a hill to reach Loch Glendhu, the path turned into a road and the going got easier. As stated before, solo hiking tends to make you ponder about your life. Easy roads tend to amplify this even more, as I had really nothing else to think about at this point.

I won’t bore you with too much detail, but up until now, my life hadn’t always gone the way I hoped it would turn out. I suppose this goes for almost everyone out there, even prompting some to call what I was experiencing a ‘quarter-life crisis’; ever so typical of Generation Y’s life struggles, I suppose. The fact that I wasn’t alone in this did little to ease my discomfort though.

At this point in my life I was thirty-one years old and I’d spent most of my twenties struggling through a bachelor’s degree that I thought I needed, working as a bartender and generally drinking too much. Only to wake up in my late twenties to find myself severely in debt, still without a degree and suffering from an existential hangover, courtesy of eight years of debauchery and personal negligence.

In an effort to turn my life around, I had made some good progress. I cleared up some of my debt and got my life straightened out. I now had a plan and a desire to better myself, to really start chasing those old dreams of professionally travelling the world and experiencing all of it for myself. Scotland was always high on my list, so I came here and started walking the length of its highlands. It wasn’t until now that I realised this journey wasn’t truly the start of my new life, but rather the end of the old one. One big fat epic adventure to prove that I have what it takes to start over. I might’ve skipped out on my final essay in college, but here was one final test that I wouldn’t be able to run away from.

And so here I was, hiking alone through a stunning landscape, taking on my personal demons one hill at a time. And you know what? It worked. The closer I came towards the Cape, the more physical struggles I overcame, the more I pulled myself together and pushed ever forward, allowing me to make peace with myself.

The scenery helped, I admit.

This last week of hiking the Cape Wrath Trail took me straight through Scotland’s far northwestern highlands; a land of smooth, bare hills, green moss and heather and with that salty tang in the air with which the Atlantic Ocean reminds you of its presence just beyond those western hills.

Contrary to the rugged, more jagged rock formations in the southern highlands, the northwestern hills are less numerous than their southern counterparts. This only serves to make them stand out more, with each hill seemingly having more of a distinct character of its own.

There was an almost tangible feeling of closure in the air. As I spent those final days on the trail plodding north through ever-widening open spaces and increasingly pathless marshland I could almost see that white lighthouse tower just beyond the horizon. It felt so close now that when holding up my map to the few hills in the distance, I could already imagine the lands beyond and the last stages up to the Cape. Two more days, I reckoned. Two more days until I touched that white plaster on that lighthouse and I would call an end to this adventure, as well as this stage of my life.

Uncharacteristically enough, the Cape Wrath Trail’s second last day leads hikers out of the wilderness and onto well-asphalted roads through a small cluster of civilisation along the coast. This let me cover a few more kilometres than usual by ensuring a quick pace towards the village of Kinlochbervie. Here I made my way towards the local post office to inquire about the military bombing range up ahead.

Yes, you heard me right. Military bombing range. Practice grounds; an off-limits to all but military personnel/bullets flying everywhere/”Love the smell of napalm in the morning” type of thing.

This is because Cape Wrath, besides being a dramatic end to one of Scotland’s finest long-distance hikes, is also a place where the British government decided to have their military practice shooting explosives. When regarding some of the world’s best scenery, someone decided it’d be a good idea to bomb it all to hell on a scheduled basis. I get it, I cursed the difficult terrain as well from time to time. But to try to eradicate it with bombs? Not cool, Westminster, not cool.

Luckily for me, there were no exercises planned for that weekend so I was free to cross those last few kilometres the next day. I set up my tent on an old football field along Loch Innis and prepared myself for that last day.

The clear sky promised a sunny and warm day as I packed up my tent for the last time along the trail. This final day saw me following a few kilometres of asphalted road to reach the village of Blairmore, from where a well-maintained footpath lead me to Sandwood Bay, featuring one of Britain’s most remote and beautiful beaches.

After taking in the amazing views on the beach and as the many tourists started back south to the parking lot, I climbed the cliffs on the north end of the beach to start the final leg of my journey. These last few kilometres had me crossing the rough, pathless terrain that makes up most of the area around Cape Wrath. As I dodged patches of swampy ground and tried to navigate the difficult terrain by following animal trails wherever they appeared, I kept one eye on the amazing blue expanse of ocean now constantly visible to the west.

I was so close now. The lighthouse tower kept peeking over the hills every now and then, offering me a tantalising glimpse of a finish line that was now finally within reach. All the hardship and wonder that let me to this point now seemed to come back to me, a life on the trail now flashing before my eyes. Feeling myself being rid of the last of my demons, a sense of accomplishment and joy filled these final hours on the trail.

So close, yet a little more to go. I conquered hillside after hillside, I made my way around a sudden steep cliff and then, as if out of nowhere, a road appeared before me. It was a worn down, battered stretch of asphalt cutting through the landscape, but it heralded the end, and that made it one of the best roads I’ve ever seen. As I rounded a corner a few minutes later, the last hill blocking my view seemed to fall away to my right and offered me the vista that I’ve been working towards for almost four weeks.

The lighthouse, now fully visible and growing larger with each step, beckoned me onward. Everything was now measured in steps rather than kilometres and seconds instead of hours. Before I knew it I was standing below its white plastered walls, touching the cool stone and realising this was it. More than three hundred and twenty-five kilometres (200 miles) of rugged, marshy, wild and often pathless terrain now lay behind me. Scotland’s most challenging trail, beaten. I did it. 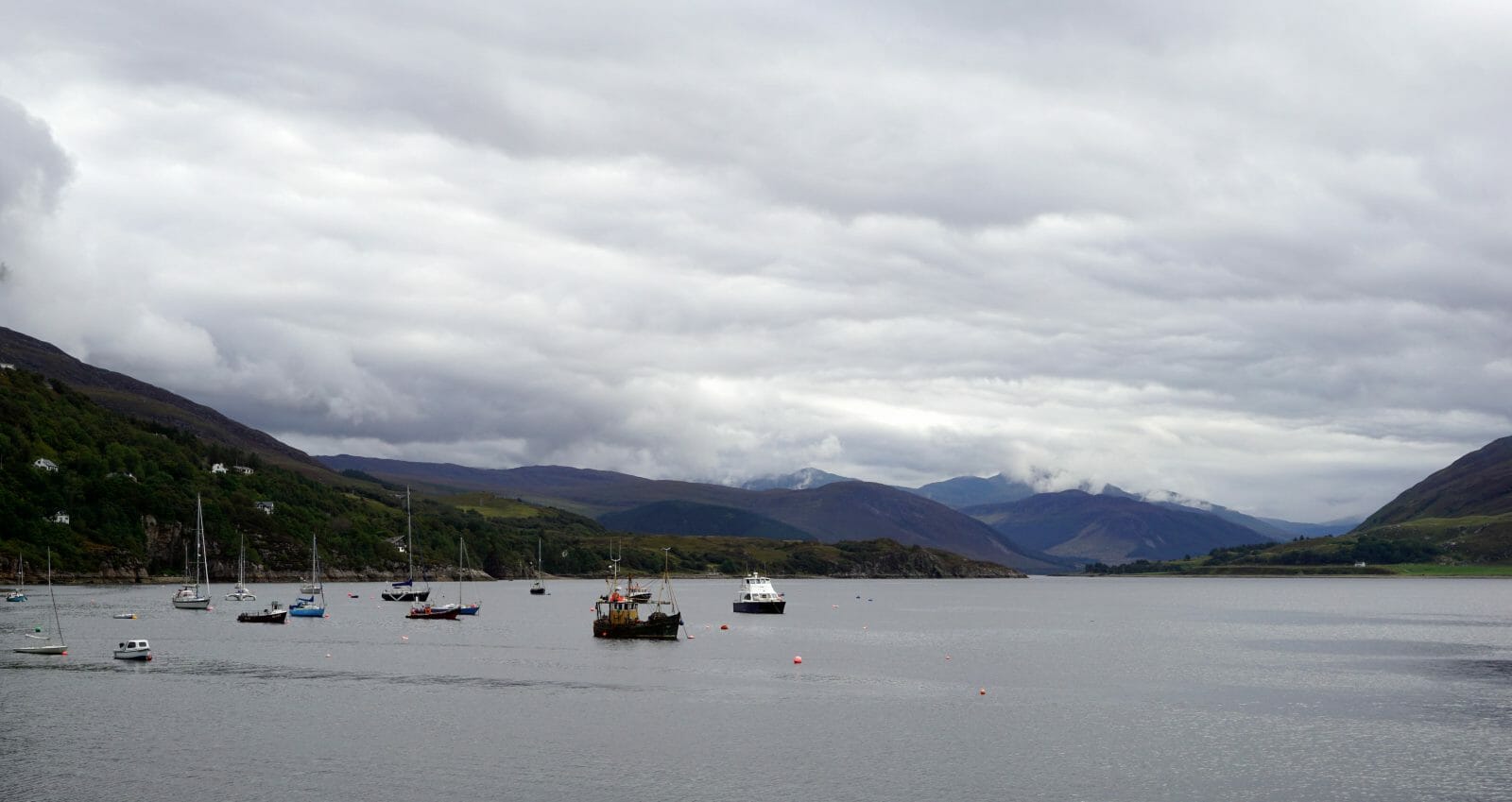 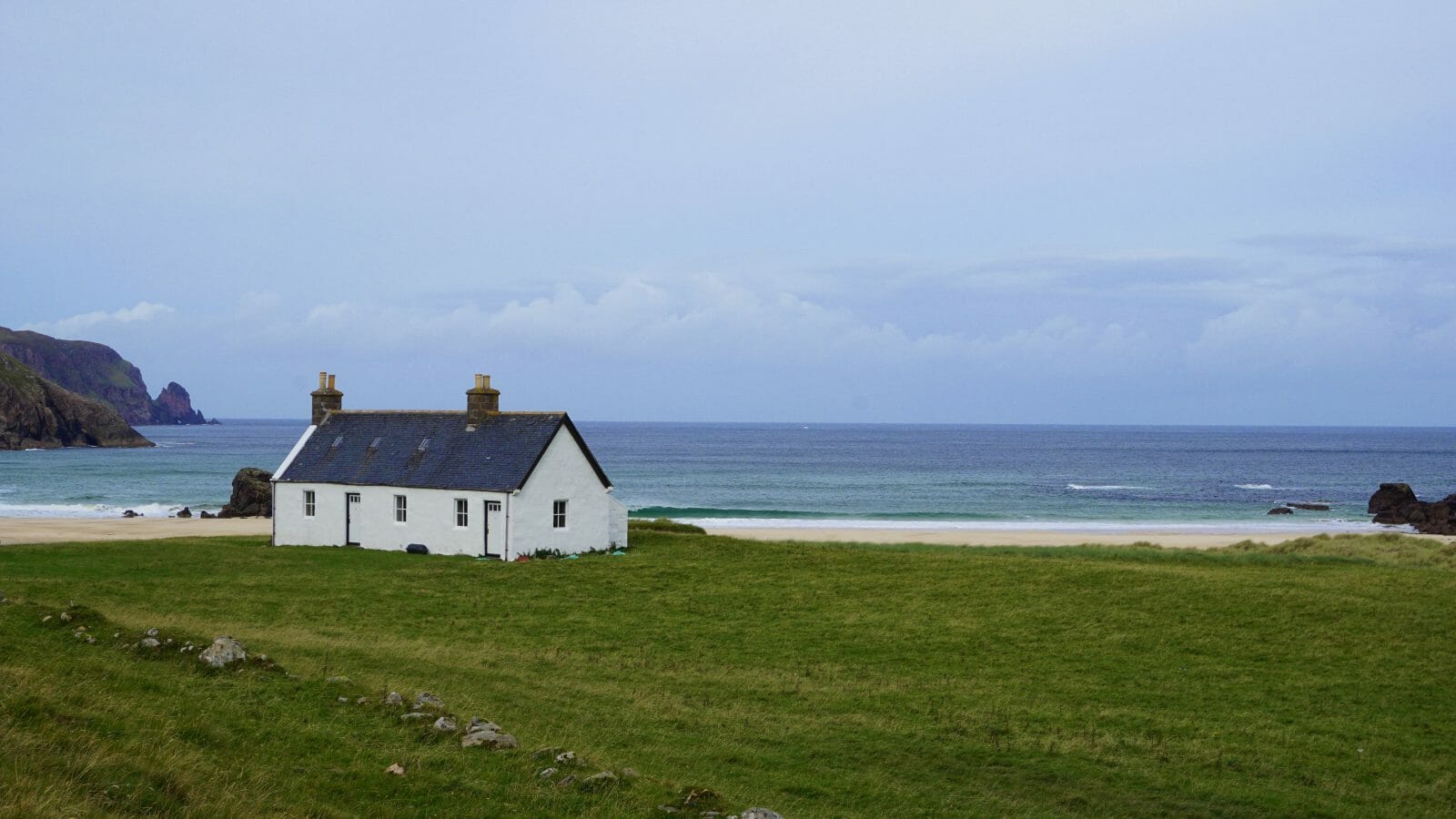