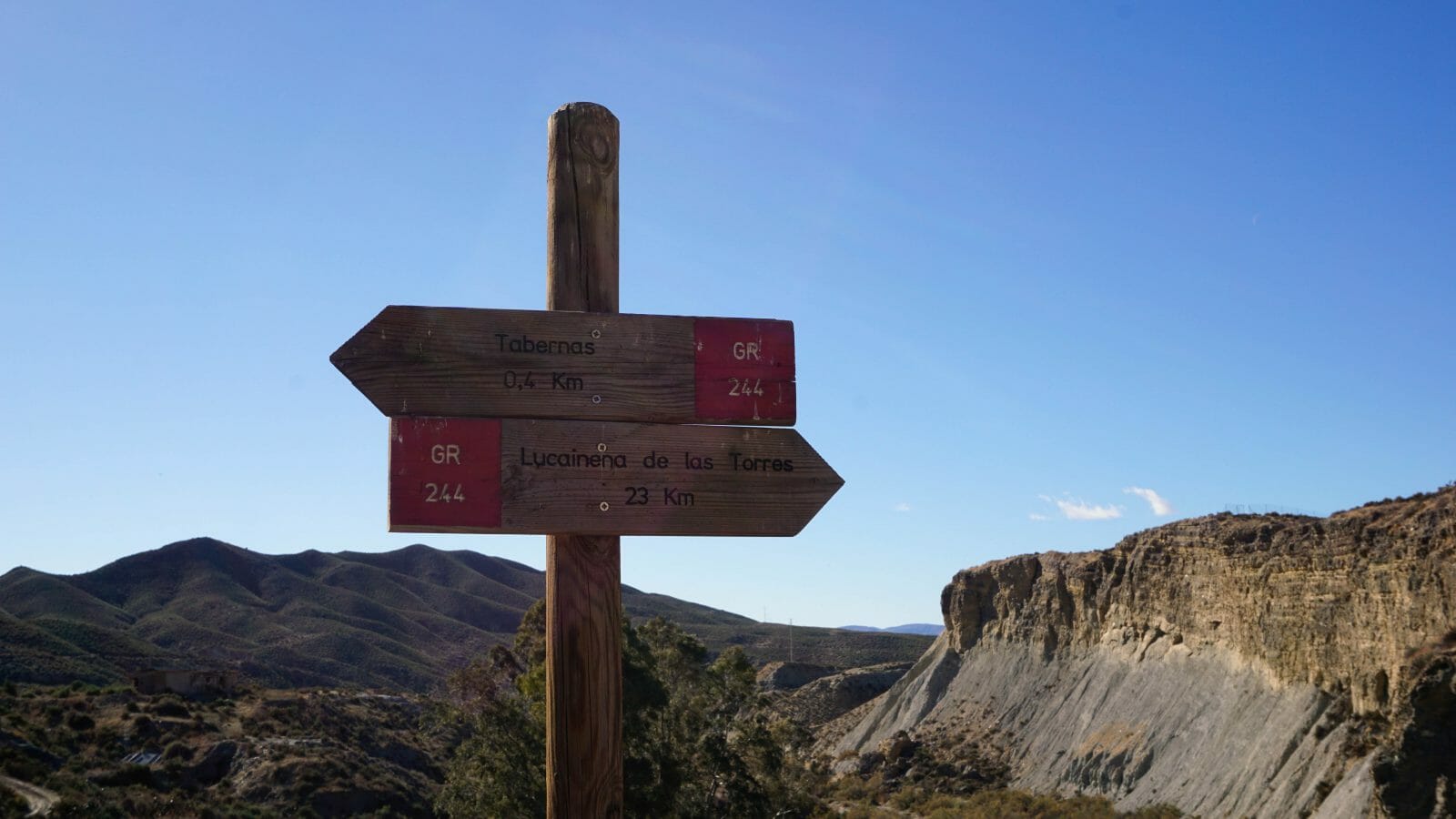 At only an hour’s drive from sunny beaches and lush green national parks lies Europe’s only desert, named after the nearby town of Tabernas. I decided to forego typical winter destinations and hike across this stretch of rugged badlands, hoping to get a proper tan in mid-January.

In spite of the blue skies and bright sun overhead I was greeted by a stiff, cold wind to remind me of the winter season as I stepped off the bus . And even though the plastered houses and Mediterranean atmosphere hinted at busy summers, the town of Tabernas was seemingly in the middle of its winter hibernation with few people and even fewer tourists going about their business in the streets.

The first thing anyone visiting these parts in winter should know is that there is practically no information to be found on-site. While images of Clint Eastwood and gunslingers on horseback point you towards information stands and ticket offices for any of the nearby spagetti-western movie sets, detailed maps of the surrounding desert or information on hiking trails seem to be extremely rare commodities.

My advice? Get your maps beforehand in the nearby city of Almeria, in one of its bookstores, or librerías. I got mine at Librería Picasso, located on Calle Reyes Católicos 18.

After spending a day hunting for appropriate maps I left Almeria the next day, eager to exchange its empty off-season atmosphere for the dusty trails and canyons of the desert. I stocked up on water in Tabernas and set off for the Arroyo del Verdelecho, the first of two mayor ramblas, or canyons, that would guide me across the Tabernas desert’s rough terrain. Walking those first kilometres with a backpack sloshing with water and a bandana tied around my face to keep the wind-blown dust out, I really did feel like walking into a Western movie. Now if only I had a horse…

The second thing you should know when venturing out into the Tabernas desert is all about water. Sure, bringing water to a desert hike seems a bit obvious, I know. And bringing at least four litres (1 gallon) of water will get you through a 3 day hike in Januari temperatures, if you’re careful. The largest water-related danger isn’t running out of water however, it’s running from water.

While the many ramblas function as highways of sorts that can guide you through the desert’s maze-like hills, they can get quite dangerous when one of the region’s rare but heavy rains set in. These may only occur a few times a year, but when they do they cause massive flash-floods that surge down these canyons, taking with them all sorts of vegetation, slow animals and the occasional gringo. So check your weather reports, kids.

Deserts like this are full of contrasts, too. While Januari daytime temperatures sit around a cool 15-20 degrees Celsius, the nights often dip around 3-6 degrees. This made for a contradicting scene as I spent my first night in near-freezing temperatures beneath a set of exotic palm trees.

I continued my trek the next day, following the Arroyo del Verdelecho further north while encountering many of the local denizens such as frogs, snakes and the occasional rodent that make their home in these dried up riverbeds. The often stunning rock formations in the canyon walls helped ease the sense of enclosement that a walk like this can bring, solemnly portraying the area’s history through a silent tale of rock layers and erosion patterns.

I had planned on climbing out of this rambla at some point, crossing over in the nearby Rambla de Tabernas that would lead me to the town of Gérgal on the northwestern edge of the desert. As the canyon began to slowly narrow around me, the riverbed became a single-track trail that soon became completely overgrown with thick reeds and thorny vines. I realised I probably would have to change my plans.

Carefully peering over my map I found a series of interconnecting paths through the surrounding hills that would lead me to the next rambla along a different route, one which had me walking alongside a highway for an hour or two. With cars zipping by and the asphalt under my feet providing a steady but boring surface to walk on, the Western feel of this trip was slowly turning into desert dust.

One of the advantages of walking mostly through the canyons is that they effectively close you off from unwanted sights such as highways, pipelines and tourist attractions. Luckily this roadside section was quite short and before long I was hiking among rock formations and cacti again.

The northern end of the Rambla de Tabernas rises up and widens to become a small, shallow valley of sorts, providing a better view of the surrounding landscape as you continue on towards Gérgal. Plant life starts to diversify as the surrounding rock cliffs make way for rounded hills, occasionally dotted with small olive farms.

And then you round a last hill while climbing up a dirt road to reach an abandoned gateway, standing forlorn on a stretch of land overlooking a magnificent view. Beyond the white-and-metal eyesore of Gérgal the desert landscape stretches out into the far distance. Rugged , dry hills form a sea of brown, broken up only by a massive wall of stone and trees capped with crowns of snow. After days of walking through canyons, the distant Sierra Nevada mountains gave my tired eyes a measure of comfort only a vista like this can offer.

My next destination lay ahead, and I set my feet towards it. 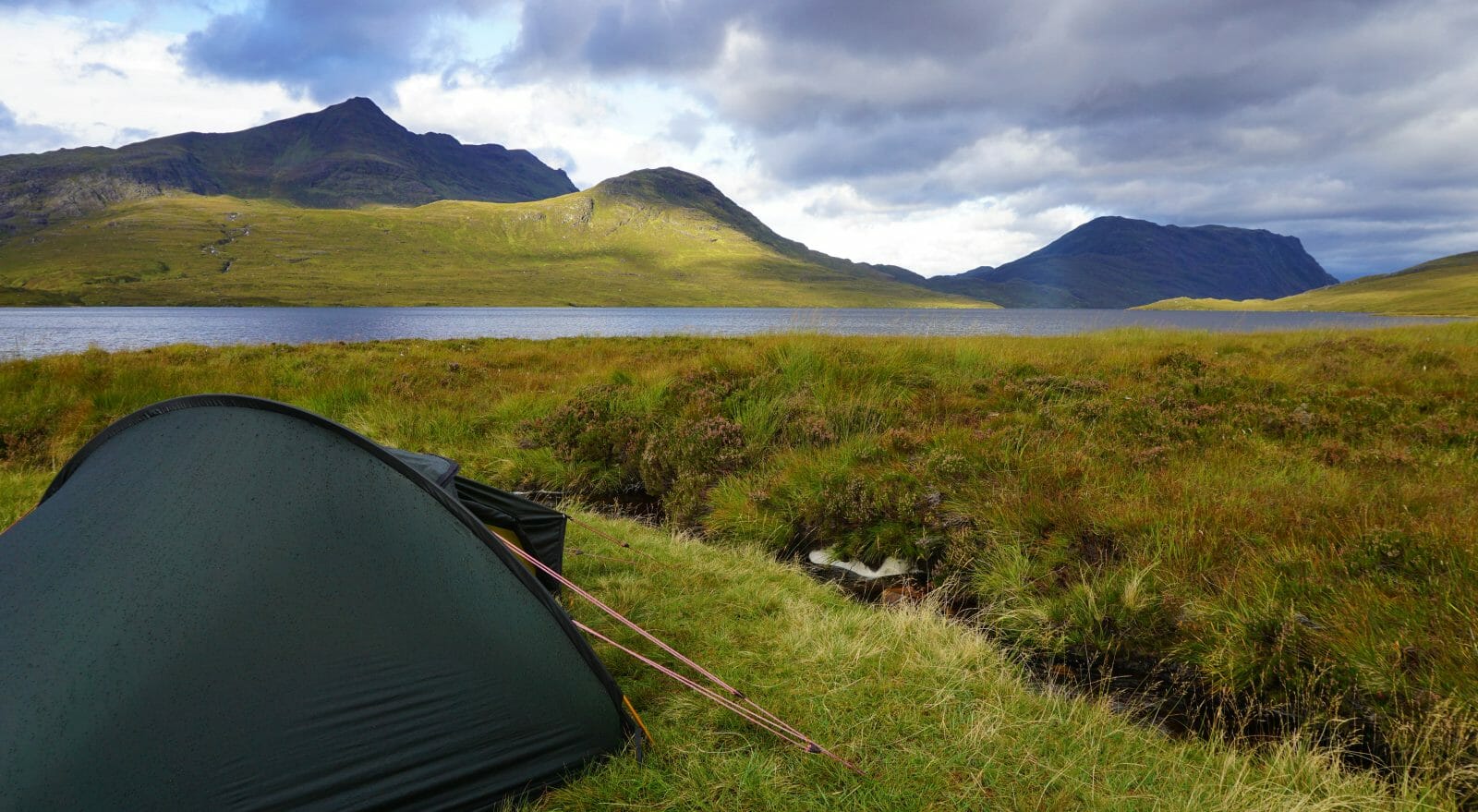 A Practical Guide To The Cape Wrath Trail 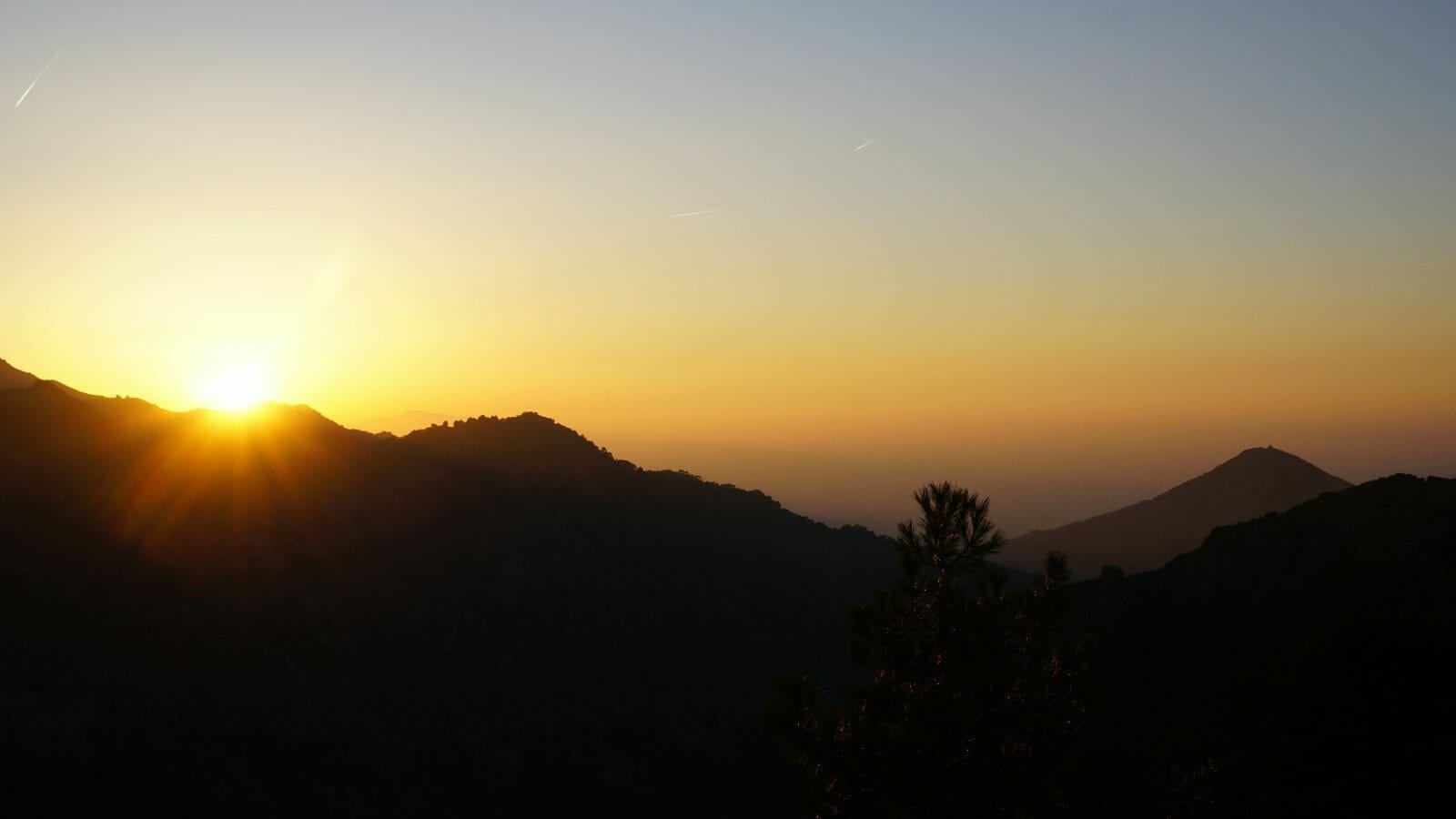 A winter hike in the Spanish Sierra Nevada